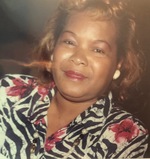 On early Sunday morning of September 1, 2019, God called his angel, Dorothy Annette Johnson,
to her eternal home. She was the daughter to the late King Williams Sr. and Dorothy Pittman
Williams. Dorothy “Ann” was born and raised in Blakely, Georgia and 20 years later she moved to Fort
Lauderdale, FL.
Ann’s passion was cooking, cleaning, shopping, helping others, and spending time with family.
Ann had the pleasure of traveling to numerous countries and other states such as Rome, Italy, which was
her most memorable of all. Ann was a natural born nurturer and she took care of her youngest
siblings all the way down to her precious great granddaughter Leilani.