To share your memory on the wall of Erica Russ, sign in using one of the following options:

When she was 16 we found out she had diabetes, which began her fight! She gave birth to her two beautiful daughters, Kyionna and Kanya. She moved to Boston, Mass. after meeting Keder Cantave, father of her youngest two children. In Boston, she attended nursing school and gave birth to her youngest, Odonis. After returning to Florida, she was diagnosed with a kidney problem and would need a kidney transplant. She was blessed with a kidney in 2017. Sadly, she developed complications which led to kidney failure. Erica made friends no matter where she went. Erica always talked to aunts and her Uncle Ron, regularly checking up on them. She was very outgoing and loved her children very much. Erica fought a long battle with health complications. She was surrounded and loved by her family and friends.

To send flowers to the family or plant a tree in memory of Erica Nicole Russ, please visit our Heartfelt Sympathies Store.

Receive notifications about information and event scheduling for Erica

We encourage you to share your most beloved memories of Erica here, so that the family and other loved ones can always see it. You can upload cherished photographs, or share your favorite stories, and can even comment on those shared by others.

Posted Oct 30, 2019 at 09:05pm
Russ family,
“God himself will be with them. And he will wipe out every tear from their eyes and
death will be no more, neither will mourning nor outcry nor pain be anymore. The
former things has passed away.” (Revelation 21:3,4) Your beloved Erica has the
Wonderful hope of a resurrection to a righteous new world where sickness and death
will be no more. (John 5:28,29, Isaiah 25:8; 33:24) May these Bible truths be a source
Of comfort for your family.
Sincerely,
Elnora Webb
Comment Share
Share via: 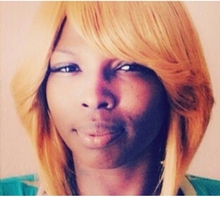