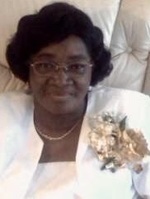 Betty Jean Elizabeth Gaskin was born on December 19, 1942, in Gainesville, Florida, to Isaiah and Sarah Gaskin, who preceded her in death.

She accepted Christ at an early age, at Atlas AME Church. As a young child, she attended A.L. Mabane School and graduated from Gainesville High School.

She entered into holy matrimony on February 3, 1962, with William M. Brazil, in Monteocha, Florida. From this union, Mother Betty gave birth to five children. In 1970, Betty relocated to South Florida with her family. As a young woman, Mother Brazil was trained as a nursing assistant at Lindsey Hopkins Trade School and worked in her field as a nursing assistant at the Veterans Hospital.

Mother Brazil served Jesus faithfully as a choir director and a member, an usher, and as a church mother to her local and district church. Mother Brazil had a big heart and was very generous; she loved God’s people and served them in the spirit of excellence.

This obituary is protected by copyright by Pembroke Pines. Proudly Serving the Communities of Pembroke Pines, Broward, Miami Dade and Palm Beach Counties. Pembroke Pines is located in the state of Florida, United States.