To share your memory on the wall of Viviene Copeland, sign in using one of the following options:

Provide comfort for the family of Viviene Copeland with a meaningful gesture of sympathy.

On December 8, 1974, Viviene married Edson
Copeland. This union was blessed with three
children. They happily owned and operated a dairy
farm in St. Elizabeth, Jamaica, until relocating to
Lauderhill, Florida in 1989.

After relocating, Viviene was a housewife who
enjoyed taking care of not only her family, but
others as well. Her kind, gentle, yet charismatic
personality was like none other. She was loving, had
a great sense of humor, and overall, her hospitality
was incomparable. She welcomed everyone into her
home with open arms. Viviene was truly one of a
kind. She was a mother to all with a heart of gold.

Viviene is survived by and leaves to cherish her
precious memories: her husband, Edson Copeland;
her son, Garnet Copeland; her daughter, Aleshia
Copeland-Wallace; her son-in-law, Jakari Wallace;
her three grandsons, Cayden, Camryn, and Cason;
her granddaughter, Amya ‘Rosie’ Wallace; her
six siblings; and a host of uncles, aunts, nephews,
nieces, cousins, church family, and friends.
Viviene will always be remembered for her love of
others and kind heart.
Read Less

We encourage you to share your most beloved memories of Viviene here, so that the family and other loved ones can always see it. You can upload cherished photographs, or share your favorite stories, and can even comment on those shared by others. 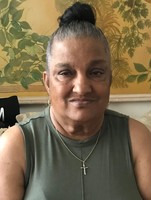