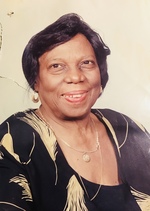 A little woman with a big heart. A simple and caring woman. The legacy she leaves
behind are her children. She was born Jacqueline St. Preux on December 9,
1930, in the small town of Limonade, Haïti. The daughter of Luc André and Seroisy
St. Preux, she attended school in Cap-Haïtien, Haïti.

She learned the trade of dress making, and with that trade, she made her living.
In her hometown, Jacqueline was the favorite to make uniforms for the schoolgirls.
With that trade, she was well-known and acquainted with lots of local families. She was
godmother to many children and would often help in raising some children whose parents
struggled financially.

Her mission was simple: to help as many as she could. She migrated to the United States
in 1989, and continued to help by sending money back home to Haïti whenever she could.
Because the English language did not come easily to her, she turned to working as a nanny
for many Haitian families. Jacqueline is survived by: her two sons, Frantz and Rony;
grandchildren, Shela, Anne, Ronide, Shaina, Woodline, Jasmine, and Sanjae; great-grandchildren,
Harmony, Marquis, Ernska, and Ariyanna. The family praises Marie-Lourdes Chery who
took great care of her when she first became ill. We give thanks to all the Chery and St. Preux families. Although she’s gone, Jacqueline will never be forgotten.

May her soul rest in eternal peace.

This obituary is protected by copyright by Pembroke Pines. Proudly Serving the Communities of Pembroke Pines, Broward, Miami Dade and Palm Beach Counties. Pembroke Pines is located in the state of Florida, United States.