To share your memory on the wall of Degrace Odine, sign in using one of the following options:

In 1996, at the age of sixty-three, Degrace emigrated from
Haiti to the United States, specifically Fort Lauderdale,
Florida. Thereafter, she became an active member of La
Renaissance Baptist Evangelical Tabernacle, founded
and led by Pastor Marcel Metayer. She was a woman of
unwavering faith. For many years, she was a part of the
women’s choir known as Group Dame of La Renaissance.

Degrace was a devoted mother of three children, Amos
Milfort, Francis Dorestil, and Polene Dorestil Arne.
She was known for being a quiet, graceful, caring, and
generous person.

To send flowers to the family or plant a tree in memory of Degrace Odine, please visit our Heartfelt Sympathies Store.

We encourage you to share your most beloved memories of Degrace here, so that the family and other loved ones can always see it. You can upload cherished photographs, or share your favorite stories, and can even comment on those shared by others. 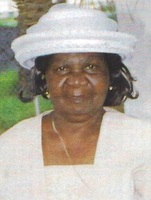