To share your memory on the wall of Ruth Barrow, sign in using one of the following options:

Mother in Law to Tatsiana Barrow

Sister in Law to Ellery Charles

Ruth Angela Barrow was born April
3, 1943, in Castries, St. Lucia, to
Geraldine Charles. Ruth grew up in
the CDC in St. Lucia. She was raised
by her Aunt Ivy, because both her
parents had predeceased her while she
was very young. Her first career was as
a teacher at the Anglican School. She
later left St. Lucia, and her teaching
post to get married in Barbados.
Mum to Tamasa and Troy, she was a stay-at-home mum in
our early childhood, and she worked to raise us right. She
also shared the things she loved, like her creativity.

As we got older, she started to get back into the workforce,
initially in our father’s business for a few years. Some years
later, after graduating cosmetology school, she opened her
own salon, La Tête hair salon. When she decided to migrate
to the United States, she worked in fashion sales at Dillard’s,
where she excelled. She later decided to move on to Neiman’s
Last Call at Sawgrass Mills, until she retired.

Mum was fortunate to meet her granddaughter, Ayla, with
whom she was able to spend her first Christmas. She also
taught Ayla her first song.

Mum loved fashion and interior design. She was always a
student of fashion and loved to dress well. She was a great
dresser, right up to her choices for glasses, for which she
always got compliments.

On Thursday, March 12, 2020, Mum peacefully departed this
world. May she rest in eternal peace and rise in Glory.
You enhanced our lives immensely, and we will carry on your
love, creativity, and resilience. We love you so much, Mum.

To send flowers to the family or plant a tree in memory of Ruth Barrow, please visit our Heartfelt Sympathies Store.

We encourage you to share your most beloved memories of Ruth here, so that the family and other loved ones can always see it. You can upload cherished photographs, or share your favorite stories, and can even comment on those shared by others.

Samuel, Magdalena and Families, Sandy Lane Finance team, and others have sent flowers to the family of Ruth Barrow.
Show you care by sending flowers

Posted Mar 20, 2020 at 06:58pm
To Tammy, Our deepest condolences. We pray the love of God enfolds you during your journey through grief. Much Love - Vicki Hall and Family

Flowers were purchased for the family of Ruth Barrow. Send Flowers

Posted Mar 20, 2020 at 12:57pm
May our loving thoughts embrace you and your family during this difficult period of mourning. 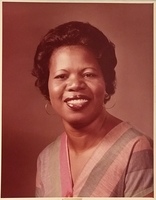