To share your memory on the wall of Curtis Sanford, sign in using one of the following options:

As a young child, Curtis was charming, funny, and had an outgoing spirit.
Curtis left a legacy and made an enormous impact on everyone he came
in contact with. He was educated in the Broward County School system,
where he attended Royal Palm Elementary, Lauderhill Middle School,
and graduated from Piper High School in May 2007. He later attended
Broward Community College.

Curtis Sanford was called by God and was saved at an early age. As a child,
he would hold a drumstick as a microphone and pretend to preach and
shout at the same time. In May 2005, he accepted his calling as a preacher
and had his trial sermon at Brown’s Temple F.B.H Church. He was a
member and faithful servant. He was active in the church and served as
a junior deacon, B.T. choir member, B.T. choir president, B.T. Vacation
Bible School teacher, B.T. youth Bible study teacher, Southern Florida
District Ambassador, Southern Florida District Choir Director, Southern
Florida District Evangelist, and Southern Florida Ordained Minister of
the Fire-Baptized Holiness Church of God of the Americas. Curtis loved
the Lord, his family, and friends with his whole heart. He was ordained
in the F.B.H. church in January 2015, at the Annual Convention held in
Jacksonville, FL.

Curtis believed in having church and praising the Lord. He loved the Fire
Baptized Church. Elder Curtis D. Sanford’s final words on March 14,
2020, were “Fire light up, Fire burn up, Fire Purge, and Fire Purify, I’m
Fire Baptized as the Late Bishop W.E Fuller would say.” He loved to shop
and dress in his fine suits with his ties and bows.

Rev. Curtis Sanford was very adventurous and wanted a new lease on life.
He relocated in March 2015, to the Atlanta, GA area. He joined Higher
Dimension International, where he was a leader over the youth. He was
ordained as an Elder in October 2018. Curtis was a faithful member and
servant, until his health failed.

To send flowers to the family or plant a tree in memory of Curtis David Sanford, please visit our Heartfelt Sympathies Store.

We encourage you to share your most beloved memories of Curtis here, so that the family and other loved ones can always see it. You can upload cherished photographs, or share your favorite stories, and can even comment on those shared by others.

From the Holloway, Peyton and Coley Family with Lo and James A Coleman II have sent flowers to the family of Curtis David Sanford.
Show you care by sending flowers

From the Holloway, Peyton and Coley Family with Lo

Posted Mar 27, 2020 at 07:12pm
Praying for peace/strength through this difficult time. Although we are absent in person we are there in spirit, and"Ducky" is forever in our hearts.

From the Holloway, Peyton and Coley Family with Lo purchased flowers for the family of Curtis Sanford. Send Flowers

Posted Mar 26, 2020 at 08:18am
My brother and my friend, Gods will is sovereign, but Lord knows I will miss you dearly! Rest easy man, i shall see you when my ship comes sailing in. 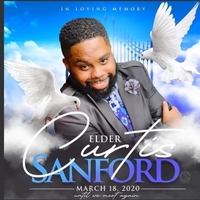