To share your memory on the wall of Petronella Bloomfield, sign in using one of the following options:

Provide comfort for the family of Petronella Bloomfield with a meaningful gesture of sympathy.

Church played a very important role in her life. She attended Bible
Way Apostlic Church, where she served as a missionary and a
family advisor. Most Sundays, she would preach at church. Church
was lively when Mother Pet was around. She was known by almost
everyone in her community, and she was willing to help and even
to be a midwife for pregnant mothers. To be in her presence was
just great. She was not short of jokes and funny stories.

After the death of her husband, Nicholas, she started traveling
to the United States. After many hard times, she became a U.S.
citizen. While in Florida, she prayed to have another son, so the
Lord brought Muraice Walker into her life. He was now the son
that she prayed for.

Over the past few years, Petronella suffered some health issues, but
with God’s help, the medical staff, and the support of her loving
children and grandchildren, she weathered the storm. Despite
the many problems she encountered, she was always optimistic
about life. One of her greatest joys was being with her family,
and she enjoyed every moment. On March 21, 2020, she breathed
her last breath, and now she awaits the trumpet of God. She was
preceded in death by her husband, Nicholas Bloomfield, and sons,
Lincoln Barnes and Benton Bloomfield.

May her soul rest in peace.
Read Less

To send flowers to the family or plant a tree in memory of Petronella Bloomfield, please visit our Heartfelt Sympathies Store.

Receive notifications about information and event scheduling for Petronella

We encourage you to share your most beloved memories of Petronella here, so that the family and other loved ones can always see it. You can upload cherished photographs, or share your favorite stories, and can even comment on those shared by others. 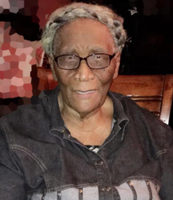