To share your memory on the wall of Fletcher Boyd, sign in using one of the following options:

Print
Fletcher Boyd was born in a barn
back in Waycross, Georgia, on
August 14, 1953, to the amazing
James Fisher and Elizabeth Vaughn,
who both preceded him in death.

At an early age, he moved to
Pompano Beach, F... Read More
Fletcher Boyd was born in a barn
back in Waycross, Georgia, on
August 14, 1953, to the amazing
James Fisher and Elizabeth Vaughn,
who both preceded him in death.

At an early age, he moved to
Pompano Beach, Florida, where he
began his early years of education.
He began his adult life as a painter
and construction worker in his early
20’s, where he also began his true
walk of faith under the leadership of the anointed and holy
ghost filled Pastor T. Wayne Parks of Full Gospel Church.
Fletcher was a dedicated member of this church up until the
time of his untimely transition.

While on his Christian walk of faith, he was united in holy
matrimony to his Queen, Dorothy Johnson-Boyd, on March
11, 1978. Fletcher was not only a God fearing man and a
strong believer of the Lord, he was also a husband, father,
brother, and grandfather. He helped many people throughout
his years of life. He was a strong man that would never let
you see him down, no matter how hard times were. Fletcher
always knew the right prayer to make everyone feel at ease.
He enjoyed spending weekends with his grandchildren, kids,
and also enjoyed talking with his family over the phone.

To send flowers to the family or plant a tree in memory of Fletcher Boyd, please visit our Heartfelt Sympathies Store.

Receive notifications about information and event scheduling for Fletcher

We encourage you to share your most beloved memories of Fletcher here, so that the family and other loved ones can always see it. You can upload cherished photographs, or share your favorite stories, and can even comment on those shared by others. 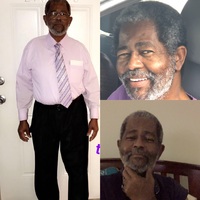