To share your memory on the wall of Larry Robinson, sign in using one of the following options:

throughout Larry’s life, he pursued his education with the Broward
County Schools system. He... Read More
Mr. Larry Tydell Robinson, Sr., was born on November 4, 1953 in
Fort Lauderdale, Florida to the late Donell and Catherine Robinson

throughout Larry’s life, he pursued his education with the Broward
County Schools system. He worked in the Broward County School
system for many years as a custodian, then pursued a career with
Univis Eyeglass, Inc. and worked as an Eyeglass Processor Specialist.
Larry was also a skilled a Radiator Technician with automobiles. In
his latter days he accepted Jesus Christ as his Lord and Savior.
Larry was a generous, kind, and loving husband, father, uncle, and
brother. He was married to the late Mary Lee Robinson Bordon,
two sisters (deceased) Betty Shaffiers and Evenly Harrison.
He leaves to mourn his loving daughter Tammy Robinson Gethers
(Bill) and an amazing son-Larry Robinson Jr. (Tameka): Two
brothers, Kenny Lee Robinson of Fort Lauderdale and Tommy
Jones of Delray Beach, Florida, Two sisters: Tonita Wright (Otis)
and Charlotte Robinson Allen (Ervin) of Philadelphia, with nine
grandchildren: LaToya, Tammy (Tootie), Tamera, Tamora, Tia,
Claudia, Larriesha, Larriana, and Jaquez; A special daughter he
never turned his back on Tangela Smith; Five grandsons: Antwan,
Darren, Terry, Tyrone, and Eric; Four great grands. A special
nephew Cedric and a niece Tonya Shaffiers, and a host of nephews, nieces, cousins, other relatives, and friends.
Read Less

To send flowers to the family or plant a tree in memory of Larry Tydell Robinson Sr., please visit our Heartfelt Sympathies Store.

Receive notifications about information and event scheduling for Larry

We encourage you to share your most beloved memories of Larry here, so that the family and other loved ones can always see it. You can upload cherished photographs, or share your favorite stories, and can even comment on those shared by others. 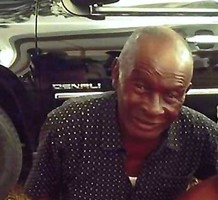