To share your memory on the wall of Fabien Esteril, sign in using one of the following options:

He received Jesus Christ as his Lord and Savior at an early age and served God devoutly ever since. In Haiti, he attended Apostolic Church of Milot (Eglise Apostolique de Milot). While living in Fort Lauderdale, FL, he was an active member of Evangelical Haitian Church Siloe (Eglise Evangelique Hatienne Siloe Church); there he served as a choir member and provided transportation in his van to members in need of a ride to church service. In February 2007, he relocated his family to Port Saint Lucie, Florida. There he attended, the Tree of Life Baptist church faithfully. He served as the church Treasurer for many years and was beloved by his church family.

In his early years, he enjoyed gardening and herding animals in his Father’s farm. His teenage memories included hobbies playing outdoor soccer and dominoes. From youth to adulthood, he was known for his amazing sense of humor, servant heart and optimism. His passion to serve and cook, led him to dedicate twenty-one (21) years in the culinary field at Pinecrest Preparatory School. His work ethic was unmatched; he would wake up at 4:00 am every morning to commute to his job in Fort Lauderdale, despite his health challenges. In his down time, he enjoyed gardening, sipping on herbal teas, playing popular Haitian card games, watching sports, especially rooting for his favorite team the Miami Heat. He also found pleasure in sharing videos and communicating on WhatsApp with friends and family near and far.

Fabien Esteril spent his life’s legacy as a Man of Valor-a man after God’s own heart. He always kept a smile on his face with minimal complaints. He will be remembered for his selflessness-always willing to lend a helping hand whether he was sick or not. His bubbly personality and bright smile would light up any room. Moreover, what was most important was his love for God.

Fabien Esteril peacefully went home to be with the Lord, Thanksgiving Day, Thursday, November 26, 2020 at the age of 62.

To send flowers to the family or plant a tree in memory of Fabien Esteril, please visit our Heartfelt Sympathies Store.

Receive notifications about information and event scheduling for Fabien

We encourage you to share your most beloved memories of Fabien here, so that the family and other loved ones can always see it. You can upload cherished photographs, or share your favorite stories, and can even comment on those shared by others.

Darlyne Perez and Mackline O'Connor sent flowers to the family of Fabien Esteril.
Show you care by sending flowers 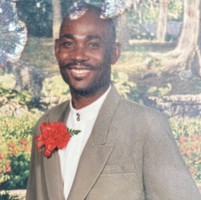