To share your memory on the wall of Theresa Frazier, sign in using one of the following options:

Theresa later relocated to Cleveland, Ohio where she met and married her husband, Gerald Frazier in 1955. They had two children, Grant and Gretchan. For a time, Theresa worked for General Electric in Nela Park making fluorescent and runway lights for airports around the world. She later began work with the Cleveland Public Schools. She worked in a variety of roles and sites in the district, including as a library clerk and as a paraprofessional serving children with special needs. In addition to her work, she was a founding member of the Biltmore Avenue Street Club and of the Vanguards II Black Firefighters Wives Club. She also volunteered for political campaigns of candidates she supported. Theresa enjoyed traveling with her family, hosting social gatherings at her home, and reading. In 1978, her husband, a Cleveland firefighter, passed away and Theresa went on as a single mom to raise her children.

In 1995. Theresa retired from the Cleveland Public Schools and in 2001 relocated to Port Saint Lucie, Florida to be near her sisters. Theresa was a stylish and classy lady with a feisty personality. While in Port Saint Lucie, she became active in a local book club and actively supported local art events and performances until illness restricted her participation.

She leaves to cherish her memory two children: Grant Frazier of Denver, Colorado and Gretchan Davenport of Port Saint Lucie, Florida, Theresa will also be remembered by her 4 grandchildren, Kirah Nelson, Alexander Frazier (Ginger), Kendell Case (Justin), Hailee Frazier, and 1 great-grandchild, Waylon CaseTheresa is survived by one sister, LaFronza Hardy and one brother, Emmitt Griffie. She also leaves behind a host of loving nieces and nephews, cousins and dear friends.
Read Less

To send flowers to the family or plant a tree in memory of Theresa J. Frazier, please visit our Heartfelt Sympathies Store.

Receive notifications about information and event scheduling for Theresa

We encourage you to share your most beloved memories of Theresa here, so that the family and other loved ones can always see it. You can upload cherished photographs, or share your favorite stories, and can even comment on those shared by others.

Vivid Recollections was purchased and planted a memorial tree for the family of Theresa Frazier. Send Flowers 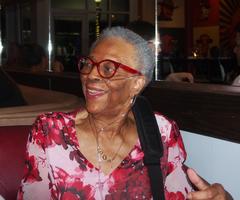